A SECURITY officer who carried out lifesaving first aid and helped calm an intoxicated male armed with a Stanley knife, has been honoured with an award. 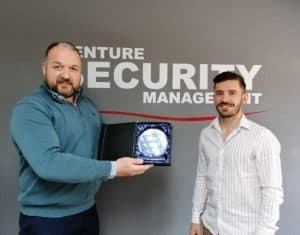 Ashley Munn, who works for Venture Security based on Dene Road in Andover, is part of a team of officers who look after a charity property that provides temporary accommodation for vulnerable homeless people.

His actions in dealing with two serious incidents on site have seen him recognised with an ACS Pacesetters Security Officer of Distinction Award.

The annual awards recognise security officers who have excelled in their duties and gone above and beyond, even putting their own safety at risk, for the protection of others.

The incidents happened last October. While on duty, Ashley discovered a resident who had overdosed on alcohol and drugs. Ashley carried out lifesaving first aid until the emergency services arrived and continued to support them until the male was able to be moved into the ambulance.

The following day, he was then faced with a disruptive male resident who was struggling with mental health issues, intoxicated and armed with a Stanley knife.

Ashley supported staff to de-escalate the situation and disarm the man, for the safety and wellbeing of everyone concerned.

Commenting on his award, Ashley said: “I was really shocked to hear I’d be getting this award. When you work in security you know you are going to be faced with challenging situations and that’s where your training and the support of the team around you really kicks in. I’m just glad that I was able to help resolve the situations as quickly and safely as possible.”

Paul Howe, Venture Security’s managing director, added: “This award is hugely deserved. Ashley demonstrated quick-thinking and an ability to work under pressure. His actions in response to both situations prevented further harm and injury, and he is a credit to the Venture team.”

Around 90 nominations were submitted for this year’s awards, covering exceptional work and individual acts of bravery. The winners were honoured at a special virtual event, which took place on Wednesday, June 16.

Clacton doorman who was drugged weighs in on Colchester Spikings