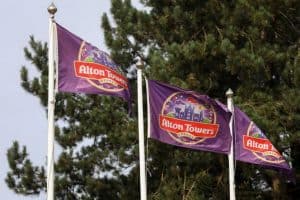 Alton Towers has sacked a security guard after he was found to be continually pursuing ‘shoplifters’ in his “unroadworthy” company vehicle after it had been hit by a fleeing VW Golf.

This verdict came after ruling his vehicle was unroadworthy following the collision.

It was also found he had committed several driving offences as he was not wearing a seatbelt, he was using his mobile phone while driving, and he was using emergency lighting on a public highway.

Mr Hughes, who had worked at the resort since 2018 and was regarded as a role model with an exemplary record, lost his appeal against the dismissal and took his former employer to an employment tribunal after suggesting he may have been concussed.

But the tribunal dismissed his claim for unfair dismissal.

The appeal found his driving dangerous but cleared him of the three other allegations.

The tribunal heard that Mr Hughes had been intentionally blocking an exit when his vehicle was rammed by suspected shoplifters in August, 2020.

But, without checking the condition of his vehicle, Mr Hughes went off in pursuit of the Golf which had children inside – he was suspended the next day.

Employment Judge Christopher Gaskell has ruled: “The evidence available to the respondent clearly suggested that the claimant was aware that the vehicle had been involved in a significant collision.

“If he was not actually aware of the damage, at the very least, he acknowledged that he should have checked for damage before driving the vehicle onto the highway.”

He added: “Such incidents are what he was employed to deal with.

“The claimant’s response on this occasion of driving so dangerously; so unnecessarily; without regard for his own safety or that of other people, clearly and reasonably undermined the respondent’s confidence in his ability to do his job in the future.”