The elderly supermarket shopper who ended up in hospital with a minor bleed on the brain, has written a letter to the ASDA employee 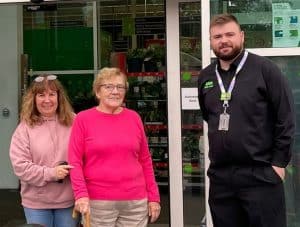 An ASDA security guard has gone viral for his treatment of an 87-year-old woman who collapsed in store – and ended up with a bleed on the brain.

Eighty-seven-year-old Asda customer Elsie Abbot thanked her “guardian angel” Steven Rice who lay next to her on the ground, held her hand and chatted with her until an ambulance arrived after she fell and banged her head outside our Enniskillen store.

Security section leader Steven and his colleagues made sure Elsie was warm and comfortable and made sure she didn’t slip into unconsciousness.

Great-grandmother Elsie, who suffered a dislocated shoulder and cut to her eye in the fall, said: “Steven never let go of my hand. He just kept me talking all the time. At one stage I told him to keep quiet as I wanted to sleep, but he said to me ‘but I don’t want you to sleep’.

“He was wonderful. He was my guardian angel and I will never, ever forget him. I love him so much even though I don’t know him that well – though we did get to know each other pretty well that day!

“We laughed and had a giggle and at one point we said we’d go on a date to Paris together! I couldn’t see him properly – I thought he was in his sixties, not 29!

Steven was helped by front-end manager Ian Preston, security colleague and first aider Darren Owens, colleague Mark Wilson, and members of the construction team who were working on the store’s recent refit who helped to clear the area and give Elsie some space and privacy.

Elsie said: “Everybody was so good to me. I cannot get over them. Everybody at Asda was wonderful to me. I can never forget that. I want to thank every blessed one of them but Steven comes tops! I don’t think there is anybody as good in this world as Steven.”

She spent three days in hospital being treated for a minor bleed on the brain, her shoulder and her eye, but she’s now recovering well at home. She said: “I’m as tough as old boots I am. I just want to get my looks back so I can go to Paris with Steven!”

Ian stayed with Elise the whole time too and helped to keep her comfortable, while Darren, who is a first aider, cleaned her eye as she’d hurt her eyelid when she fell.

Elsie’s daughter Pat Abbot, who was with her when she fell, said she couldn’t thank Steven and the team enough for their “help, kindness and empathy” and the support given to her too.

In a letter to the store she said: “Your kindness and help was very much appreciated on what was a really traumatic time.”

Steven, who’s worked for Asda for five years, said caring for Elsie as he did was just the right thing to do.

He said: “She was in a pretty bad way. The ambulance service said not to move her at all, so we just made her comfortable with pillows and a blanket.