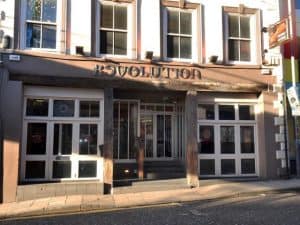 A police officer who was chucked out of a Call Lane bar is on a final warning after a drink-filled rant just the night before he was due on shift.

PC James Fridlington was in Revolution Bar, Call Lane, on July 16, 2019, when a bouncer noticed he was “unsteady” on his feet and asked him to leave.

PC Fridlington refused, according to a summary of a West Yorkshire Police misconduct hearing for fitness for duty and discreditable conduct.

He was escorted from the venue, but returned and was asked to leave again before verbally insulting staff.

PC Fridlington resisted arrest when fellow officers arrived to detain him and continued to refer to the bouncer in insulting terms once he was in custody.

At 9.30am that day he was subjected to a breath test, which gave a reading of 50 micrograms of alcohol per 100 millilitres of breath.

“There is a presumption that a person is unfit for work if they have more than 13 milligrams of alcohol per 10 millilitres of breath,” according to the misconduct panel.

Three allegations made against PC Fridlington were found proven.

These were that he: used abusive/ insulting language towards officers and staff at the Revolution bar; unlawfully resisted arrest and “consumed a significant amount of alcohol during the night of 16 July 2019, knowing that you would be on duty at 0700 hours on 17 July 2019 and that you would not be fit for duty”.