A drunken man repeatedly punched a off-duty doorman as he lay unconscious on the floor during “absolutely disgraceful” violent scenes. 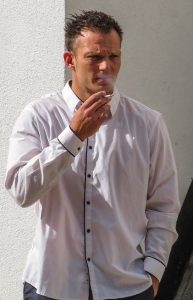 Jamie Bearman launched the vicious attack while on a drinking bender with his brother that led to both of them, and another doorman, being up before the courts.

Violence erupted after Jamie and Ricky Bearman thought they had been cheated out of money by a fruit machine at a bar in Leamington.

Jamie was led outside by Dean Clarke, an off-duty doorman from another venue, before he attacked Mr Clarke.

Meanwhile, Ricky racially abused and then ended up fighting Daniel Baldyga who was working at Kelsey’s as a doorman that day. Baldyga ended up pummelling Ricky with his fists as they spilled out the door.

Jamie, 33, of Nursery Lane, Leamington, was jailed for 21 months.

Ricky, 30, of Haseley Close, Leamington, who was told it was largely down to him that his brother had lost his liberty, was sentenced to 10 months in jail suspended for 12 months and ordered to do 150 hours of unpaid work.

Baldyga, 34, of Weston Close, Leamington, who the judge commented was being paid to stop trouble not exacerbate it, was sentenced to 15 months suspended for 12 months and ordered to do 180 hours of unpaid work.

Prosecutor Sharon Bahia said the Bearman brothers were in Kelsey’s Bar in High Street, Leamington, in the early hours of August 18 last year when they began demanding money they said they were owed from a fruit machine.

The manager explained that they had clocked up credit on the machine, but not a payout, at which they angrily threatened to pull out the machine and take it.

So Baldyga was asked to keep an eye on them, and the manager also mentioned what was happening to Dean Clarke, an off-duty doorman from another venue.

As Jamie kept shouting that he wanted the money, Ricky aggressively confronted Baldyga, hurling vile racist abuse at him.

At the same time, Mr Clarke escorted Jamie to the door, but can remember nothing after that.

CCTV cameras showed that Jamie had launched a vicious attack on him as they got outside, continuing to rain punches to his head and face as he lay unconscious on the ground.

He had bruising to his head and face, cuts to his head and below his eye, and suffered blurred vision for some weeks after the incident and had to have time off work, said Miss Bahia.

Meanwhile inside the doorway Ricky and Baldyga, who had taken off his jacket, had squared up to each-other head-to-head – and Ricky pushed the doorman backwards with his head.

Baldyga snapped and began pummelling Ricky with his fists before being pulled away as they spilled out of the door.

Ian Speed, for the Bearman brothers, said: “Jamie is remorseful, having seen the injuries he caused.

He said Jamie, who has his own business employing two people, was not aware Mr Clarke was unconscious when he went back in to assist his younger brother “who he thought was in peril”.

Mr Speed said Ricky, a carpenter, was drinking far too heavily at the time after splitting up with his long-term partner, and had had 15-20 pints that night.

Clare Evans, for Baldyga, said he had been subjected to “a relentless verbal assault by these two brothers who were drunk out of their heads” which had including racial abuse.

She said he had taken his jacket off not as an act of aggression, but because he had anticipated being subjected to violence and had had two jackets ripped during previous assaults.

Sentencing the three, Judge Cooke told them: “This was, throughout, a disgraceful episode which began with you two Bearman brothers and quickly descended into abuse and violence.

“What you did Ricky Bearman was verbally extremely unpleasant and was backed up by posturing body language followed up with a shove with the head. Thereafter you became the recipient of violence.

“You, Baldyga, escalated matters by your gross overreaction to what was going on at a time when you were being paid to show restraint, not to knock seven bells out of people.

“Other people like Dean Clarke sought to break up what had erupted, and for his trouble he was given a thorough going over by you Jamie Bearman.

“You now appreciate you went over the top. I accept you show remorse, but appropriate punishment can only be achieved by immediate custody.”

After jailing Jamie, Judge Cooke told Ricky: “The start of this was largely down to you, and you’ve seen the result of that.  Your brother has lost his liberty, and to a large degree he has you to thank for that.”

And he told Baldyga: “Albeit that you snapped after you had been subjected to lengthy, unpleasant and hurtful abuse from a drunken man, you were a man who was being paid to stop trouble, not exacerbate it.

“What you did was absolutely disgraceful. For a doorman to behave in this way was a gross dereliction of what you were being paid to do.”