A prolific thief pulled a knife on a former soldier and threatened to stab him as he tried to stop him leaving the supermarket clutching bags of booze. 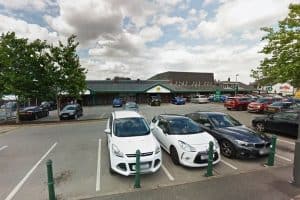 So when Kalime Shah, who has 122 previous offences to his name, whipped out the weapon and made the threats it brought back to him memories “he wishes he could forget”.

The 47-year-old defendant carried out the theft during a spate of offending which also saw him target chemists to pinch tanning products to sell for drugs.

Jailing him for two years, Recorder Paul Mann QC said: “You have been involved in stealing, theft from vehicles, theft of vehicles and so forth for a number of years.

“You went into Morrisons in Staveley and tried to leave without paying for bottles of spirits.

“You were stopped by a shop official and your pulled out a knife and said to him ‘get away or I will stab you, you fat b******’.

“This is a gentleman who served in Her Majesty’s armed forces.

“He has seen conflict and as such suffers post-traumatic stress disorder.

“You pulling a knife out on him would have been even more frightening than usual because it brought back to him memories he wishes he could forget.”

Eunice Opare-Addo, prosecuting, said between March 31 and April 21 Shah and a female accomplice carried out six shop thefts in either Matlock, Chesterfield or in Yorkshire.

She said they would typically steal hundreds of pounds of tanning products in one swoop from chemists including Superdrug in Matlock twice in two days.

Miss Opare-Addo said the first in time was the theft from Morrisons in Staveley on March 31.

She said: “The security guard in the store became suspicious of the defendant and the woman as they filled their bag in the wine, beer and spirits aisle.

“They then moved on to the toilet roll aisle and then went to the self-service check out.

“As they tried to leave the store the guard asked to see their receipt and then asked to look n their shopping bag.

“The defendant pulled out a knife and shouted at him ‘you’re not searching my f*****g bag’.

Miss Opare-Addo said Shah targeted Superdrug in Matlock on April 18 and 19 and then a different Superdrug in Yorkshire twice on April 21.

In total he and his accomplice stile more than £1,500 of tanning products.

She said on April 20, in a separate offence, he was spotted fixing false number plates to a car parked in Molloy Street, Sheffield.

Shah, of Coleridge Gardens, Darnall, Sheffield, was arrested and pleaded guilty to six counts of shoplifting, handling stolen goods and was found guilty after trial of possessing a bladed article.

It was not said in court if the woman has been caught and prosecuted.

Benn Robinson, mitigating, said: “He is now 47 years old and it is obvious he is somebody that has had real difficulty with drugs for a significant part of his life.”