A teenager has admitted slapping a police officer and biting a doorman during a night out. 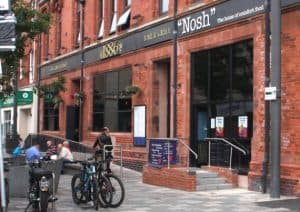 Charlotte Kelly, of School Road, Onchan, pleaded guilty to the two assaults as well as being drunk and disorderly.The 17-year-old will be sentenced on October 15 after a probation report has been completed.

Prosecuting advocate Rachael Braidwood told the court how Kelly was on the dancefloor at 1886 bar in Regent Street in Douglas on August 9 at 1.50am.

A doorman approached her after he was told she was underage.

She showed him ID which belonged to her sister but when he asked for further identification Kelly showed him a bank card in her own name.

The doorman confiscated the ID and Kelly was then said to have wrapped her arms and legs around him, then bit his arm.

She fell on the ground and then tried to bit the doorman’s leg before leaving the bar.

At 3.25am, police were called to Bordello on Loch Promenade where Kelly was said to have lunged at another woman with both of them falling to the ground.

Police separated the pair and Kelly was said to have glazed eyes and be smelling of alcohol.

As police arrested her she slapped one officer in the face as she resisted physically and verbally.

Doorstaff from Bordello assisted police in restraining the teenager.

When interviewed later, Kelly told police she was still trying to piece the night together but admitted she had borrowed her sister’s ID without permission.

She said she had been drinking tequila and wine before going out and had also taken medication.

Kelly said she had some recollection of a fight at Bordello but could not recall assaulting police.

During a second interview she was shown CCTV footage but made ’no comment’ after viewing it, other than to confirm it was her in the footage.

The court heard that she has no previous convictions.

Defence advocate Deborah Myerscough asked for a probation report to be prepared before sentencing.

Magistrates ordered that the report consider all sentencing options, including custody.

Bail continues in the sum of £250 with conditions that Kelly live at her home address and contact probation.