Violence erupted in the queue for a popular nightclub when one of the customers took exception to the venue’s search policy, a court has heard. 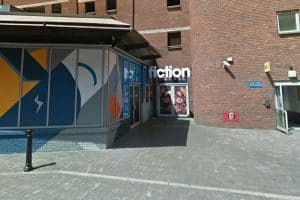 The matter quickly developed into a mass brawl involving people unconnected to the original dispute, and led to a member of door staff from a nearby hotel being clubbed with a heavy metal pole.

The victim of the pole attack – an Italian studying international relations at university – suffered broken ribs and has since returned home leaving his studies unfinished.

Swansea Crown Court heard the brawl took place on the night of February 1 this year outside Swansea ‘s Fiction club.

Dean Pulling, prosecuting, said just before midnight Jackson-Lee Bonell and brothers William and Rhys Dickie were in the queue for the city centre venue, which has a policy of searching customers upon admission.

The court heard 24-year-old William Dickie “seemed to take exception” to the policy and began challenging staff about it. He was told that he and his companions would be refused entry if they did not comply.

Mr Pulling said Dickie was removed from the line, at which point his 29-year-old brother and their 22-year-old friend got involved and the trio became “verbally abusive and aggressive”.

The court heard a scuffle broke out, punches were thrown, and “things escalated quickly” with other men who had not been part of the original dispute also joining the “melee”.

The prosecutor said a member of door staff from the neighbouring Premier Inn hotel came to help his Fiction colleagues, and William Dickie was restrained and taken to the floor.

Seeing this his brother Rhys grabbed a metal barrier pole with a heavy base that been knocked over in the fighting and, “swinging it over his head”, struck the two bouncers who were on top of his sibling. One was caught a glancing blow to the side of his face but the other, the hotel doorman, was caught directly in the chest. Rhys Dickie followed up his assault with the pole with a number of punches.

Mr Pulling said a witness would later describe the scenes as “pandemonium”.

Order was eventually restored, and police arrived on the scene to arrest the three men.

The court heard the bouncer caught in the face with the pole suffered a cut near his eye which needed stitching, and the security guard from the hotel suffered three broken ribs and had to spend 10 days on a ward in Morriston Hospital.

The more seriously injured man was a post-graduate student from Italy who was studying for a masters degree in international relations at Swansea University. He has since gone home, and is uncertain about returning to Wales to complete his studies.

In their police interviews Rhys Dickie said he had drunk 10 pints on the night in question and had been acting in self-defence of his brother, William Dickie said he had consumed a similar amount of alcohol and could not remember much after being removed from the nightclub queue, and Bonell said he thought the door staff had been “looking for a fight”.

None of the trio have any previous convictions.

Matt Murphy, who represented all three defendants, said they were men of previous good character, were highly thought of by those who knew them, and were hard-working men who were assets to their respective communities.

He said Rhys Dickie was a union shop steward at his place of employment, and regretted ever picking up and using the metal pole – he said in the heat of the moment the defendant “took a decision he never should have made”, and “lives day-by-day with the shame, worry and embarrassment” the incident had caused.

The advocate added that both William Dickie and Bonell had been subject to “summary justice” at the scene before police arrived, and as a result had being hospitalised with concussion and other injuries.

He said the incident had been sparked by unhappiness at the club’s sensible search policy, adding that door staff had a difficult job to do in maintaining safety and security of customers.

The recorder said it was a matter for the victims if they wished to pursue civil claims for compensation.