A quick-thinking security guard who saved the life of a choking toddler has been honoured with a national award. 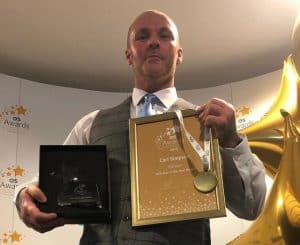 Carl Simpson, who works at the Bridges in Sunderland, sprang into action when three-year-old Jayden Percy started to choke on a piece of sausage.

The officer used his first aid training and administered the Heimlich Manoeuvre, managing to remove the blockage.

Carl’s action won him praise at the time of the incident last year and now he has been named Star of the Year at the OCS Awards held at The Oval, in London.

OCS is a global organisation which provides a range of support services to shopping centres, hospitals and leisure facilities in 70 countries and organises the awards annually to recognise and reward its staff.

The company runs the soft services contract at the Bridges which covers everything from security to housekeeping, with the staff considered very much part of the centre’s team.

“I was delighted to be nominated for the award,” said Carl. “And I couldn’t believe it when they announced my name.

“It was reward enough for me that this incident had a happy ending, but I’m very honoured to have been given it.”

Andy Bradley, Centre Director at the Bridges – who attended the ceremony with the security officer– said Carl’s award was well deserved.

“His quick thinking in putting his first aid training into action saved this little boy’s life,” he said.

“In any incident like this time is of the essence and Carl was the first on the scene and acted swiftly to deal with the situation.

“He was in a category with a number of other worthy nominees from around the UK so we’re delighted that the judges decided that he should be the winner.”

“He just started choking and I was just in shock and I was trying to tip him up to get it out and then my sister tried and couldn’t get it up,” said Sarah, from Thorney Close.

“The security guard came running over and managed to get it straight out.”