Customers were enjoying their meals in the Oasis Dining Quarter of Meadowhall on Saturday, May 4, when they heard a ‘commotion’ nearby. 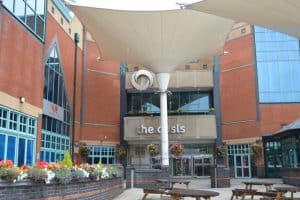 Eyewitnesses said that they a young teenage boy was being escorted out of the shopping centre by a security guard before his friend jumped in to help.

Shoppers watched on as the two young boys began punching and kicking the security guard; trying to drag him down to the floor by his neck.

The security guard was eventually helped by two of his colleagues before the group of the teenagers were escorted from the premises.

One shopper, who was with her husband and their young daughter, said the incident left her feeling ‘distressed and unsafe’.

The woman, who did not wish to be named, said: “We were in the Oasis when we started hearing a commotion. A security guard was trying to escort this young teenage boy out.

“His friend then came over and they both started to punch and kick him, trying to drag him down by his neck. This went on for a minute or two before another guard ran down to help him.

“They eventually sent the group on their way but it was very distressing. The guard was not a big guy, he was just a middle-aged bloke and he had taken a big beating.

“It looked like it hurt a lot. We saw him just before we left and he looked like he was still in shock.”

Meadowhall said that the officer involved was an ‘experienced security guard’ who used his training, and support from his colleagues before ‘safely handing the matter over to the Meadowhall Police’.

The shopper added that she hoped Meadowhall were giving the security guard ‘all the help and support he needs’ after the attack.

She said: “The teenagers set upon him like a pack of dogs. It’s not something you expect to see at a family shopping centre.

“I think they’re all doing amazing jobs and I hope he’s being offered the help and support he needs after this.

“There were lots of families around when it happened and the kids were very upset to see it. I just wanted to get my daughter out of there as quickly as possible.”