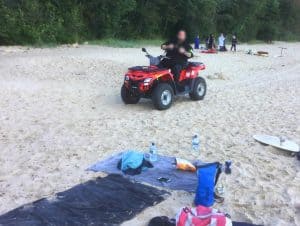 Priory Bay, near Nettlestone and Seaview, is in private ownership but has traditionally allowed for public access, and has for generations been a quiet and tranquil haven for beachgoers and families.

New owners, Aria Resorts, have taken over and secured planning permission in March 2019 for 56 lodges, a woodland retreat, a new spa, and the regeneration of the entire hotel.

Plans for treehouses within the woods were refused, but it was hoped the project would be completed by 2020.

However, the site remains unfinished and stands empty.

The owners have recently installed a security team and erected fences, and said it is due to antisocial behaviour on the beach, including overnight camping.

However, the sight of security guards on quad bikes has not gone down well with locals.

Paul Knocker, who lives in Bembridge, said: “Imagine our shock when we were confronted by a security guard, dressed in black, with a body cam, patrolling the beach on a quad bike, and demanding we pack up and move.

“I spoke to another family group nearby, who had also been harassed by the security guard and asked to leave the beach.

“Priory Bay is featured in the Isle of Wight guide to the best beaches on the Island, and I am sure visitors will not expect this kind of welcome.

“We have since heard of other similar incidents, as the new owners of the Priory Bay Hotel apparently try to establish that this is their ‘private beach’.

“This is breaking a long-standing tradition. My family have been enjoying this secluded gem of a beach for more than 50 years, and I am sure we are not alone.”

Charity Garnett, of the Save Priory Bay group, said they remained concerned about the plans for the beach and hotel.

She said: “7,500 people signed the Save Priory Bay petition last year, and we remain concerned about Aria’s plans.

“At either end of Priory Bay, Nodes Point and Horsetone Point are owned and managed by the National Trust, and there is a well established right of way along the foreshore between the two reserves.

“Furthermore, Priory Bay has been used and enjoyed by locals and visitors for generations, and the deeds state that the owners of the hotel must ‘not prevent or hinder the free use of the foreshore by the public for all reasonable and orderly recreative purposes’.

“A lot of rumour and confusion has been circulating, and it would be good to hear from Aria about their plans for this highly valued natural and community resource.”

A spokesperson for Aria Resorts said: “Following numerous incidents over the last few months we have had to increase the security presence at Priory Bay.

“The security is there to protect the buildings and private grounds, as unfortunately we have seen a significant increase in trespassing, damage to property, overnight camping, fires on the beach and in the surrounding woodland and a significant amount of littering across the grounds and beach area, potentially posing both an environmental and health risk.

“We have no desire to stop people enjoying this beautiful part of the coastline responsibly, including the local footpaths and access and of course wish to maintain the spirit of community that Priory Bay has had over many years.

“Unfortunately though we do have a clear duty to protect Priory Bay and the private grounds and need to ensure that everyone is treating the area with respect.”

Peter Cambray, representing the security team on-site, posted on a community Facebook page that signs would soon be erected to state the beach is a private one.

He said: “If you’re a regular user of the beach, you’ll see that a member of our security team starts patrolling from 6pm asking nicely that you don’t have bonfires or barbecues and that you don’t camp overnight, using the woods as a public toilet.

“We ask you to respect the rights of the owners. Those that have said you cannot see a sign depicting private beach, these are coming.”

An Isle of Wight Council spokesperson confirmed the beach is in private ownership, but a public footpath (R89) runs along the landward side of the beach, heading south for approximately 350 metres before heading up a flight of steps into Priory Woods.

The County Press asked Aria Resorts to clarify how the development of the resort was progressing, but this has not yet been addressed.