A SCREAMING solicitor attacked a bouncer with one of her stiletto shoes, a court heard. 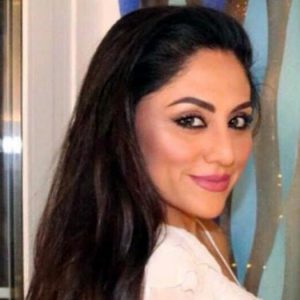 Vahideh Hojatoleslami, 28, allegedly beat Oluwakemi Tayo over the head after he threw her fiancé out of the VIP area of the Loft Studios in Willesden, north-west London.

The pair had been attending a Halloween party at the venue with friends, the court heard.

According to Mr Tayo, the 5ft 2in commercial property lawyer (pictured) was screaming at him and throwing punches as he escorted her fiancé downstairs. When they got to the exit he said he ‘realised something had hit me on the head’.

He added: ‘I turned back and I saw she was waving a shoe. I felt something dripping on my face, I thought someone had thrown water at me.

‘But when I touched my face I realised I was bleeding — and it was due to the stiletto shoe.’

Hojatoleslami, of Edgware, north London, denies assault by beating. She claims Mr Tayo swung her round by the neck ‘like a rag doll’.

The trial at Westminster magistrates’ court continues on August 20.