A HEROIC security guard sprang into action to save a child’s life when the youngster fell unconscious after choking. 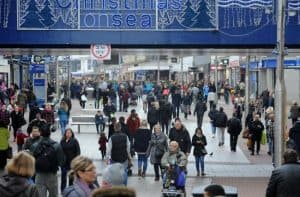 The incident took place in Southend town centre on Friday and also saw emergency services race to the scene.

And the life saver has been praised after his efforts.

The security guard works for Stambridge Security Group, a firm contracted in by Southend Council.

A spokesman for Southend Community Safety Partnership said: “A community safety officer performed emergency first aid on a child who was unconscious and choking.

“He cleared the airway and saved their life.

“An ambulance was subsequently called to check child over.

Martin Terry, councillor for community safety and customer care, also had praise for the worker.

He said: “I’m relieved to hear that the child is OK thanks to the quick-thinking action of the officer who was passing by the travel centre when he heard cries for help.

“It is to the officer’s absolute credit that he kept his calm in the incredibly stressful situation he found himself in and saved a life.

“The community safety patrol team officers have had a range of training, including first aid, so they are able to confidently deal with a variety of situations as they arise.

“So whilst it is unfortunate there was cause to use the first aid training, it is reassuring to know that when needed, our officers are able to respond quickly until paramedics arrive.”

Mr Terry added: “We recognise the importance of the work the community safety patrol unit are doing which is why in this year’s current budget we’ve added in an extra £175K to strengthen the team to help them provide more community reassurance and tackle low level anti-social behaviour in hot spot areas across the borough.”

Stambridge Security Group was contacted for comment but opted not to respond in the short-term.