A popular bodybuilder and Cardiff doorman has died suddenly. 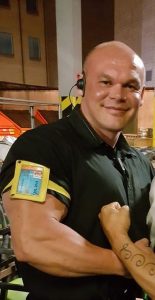 Sebastian Marcin Kakol was found dead at home in the city on Tuesday evening.

Hundreds of tributes have since been paid to the amateur body builder, who was also once a doorman at Cardiff bar Live Lounge.

The owner of gym Peak Physique, where Mr Kakol trained, David Nelson said on Thursday: “He was well known in the gym, he was a real character.

“He loved competing and he always had time to give. He was happy-go-lucky, a nice guy. Everyone is just shocked. He was in a bodybuilding show on the weekend and he won.

“He was out with friends on the Monday and he was fine. It’s a big shock.”

He added that Mr Kakol won the NAC Mr UK competition held in Manchester on Sunday.

Hundreds of tributes have been paid to Mr Kakol on social media. One person said: “You’ll be very much missed and remembered as a lovely person and a kind soul.”

South Wales Police confirmed the sudden death of a 39-year-old man who was found at an address in Woodville Road, Cathays, at around 5pm on Tuesday, November 5.

A spokeswoman said: “There are no suspicious circumstances and HM Coroner has been informed.”