An off-duty doorman escaped a custodial sentence after breaking a man’s jaw outside a Wakefield nightclub. 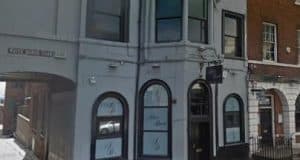 Jordan Hardaker was caught on CCTV throwing the punch at the man outside the After Dark club on Westgate in the early hours of January 15, 2019.

He appeared at Leeds Crown Court yesterday where he pleaded guilty to GBH without intent.

Footage screened in court showed Hardaker outside the club at around 1.20am and a man approaching him. They briefly talk before Hardaker is seen slapping the man with his left hand then punching him with his right hand.

They both ended up on the floor before being separated.

The victim was forced to go to Pinderfields where it was found he had a fractured lower jaw. He did not require surgery but had to endure a liquid diet for eight weeks after the attack.

A probation report claimed 27-year-old Hardaker had been drinking all day and was very drunk, which he said was out of character for him to drink so much.

The father-of-three had been in the Armed Forces but now works as a driver through the week and as a doorman at weekends, but had been suspended because of this incident.

Mitigating, Joanne Shepherd said: “He has been hard working through his life and held down two jobs prior to this offence.

“He is deeply ashamed of his behaviour and all the years he has been working as a doorman he has never been involved in anything of this order.”

The court heard how the victim was being verbally abusive towards Hardaker and the door staff at the club moments before the attack, but Judge Penelope Belcher said: “Verbal abuse cannot begin to justify your actions.

“Clearly there was conversation taking place between you, there can be no other explanation for your sudden loss of temper.

“As a doorman you should have been able to deal with this. You will know from your job that drink removes people’s inhibitions and results in all sorts of offences, including violence.

“You have now fallen into that very same trap.

“Had you been working as door staff that night I would have sent you straight into custody.”

Hardaker, of Garsdale Avenue, Idle, was given 12 months’ jail, suspended for two years and told to carry out 200 hours of unpaid work.

The Norwich Doorman that hopes to Pursue a Career in Singing