A PROLIFIC criminal who threatened a security guard before spitting in his face has been spared jail. 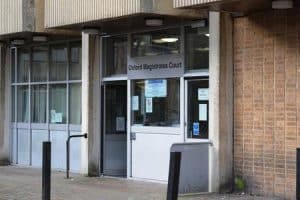 Jake Smith – who has 82 previous crimes to his name – appeared at Oxford Magistrates’ Court yesterday.

The 30-year-old of Rose Hill, Oxford pleaded guilty to one count of common assault.

Prosecutors said that Smith was at Between Towns Road, Oxford, on Monday, when he first walked past his victim.

Smith said to the man, a security guard, ‘what the f**k are you smiling at, I will punch your face in.’

He then walked past him again and said ‘I am going to spit in your face’ before hurling spit in his direction.

When that shot missed the man Smith went on to ‘square up to’ him before spitting at him a second time.

That spit struck the man’s left cheek, landing near to his eye.

The court heard at yesterday’s hearing that Smith has a large number of previous convictions, made up of 40 convictions for 82 offences, including for robbery and assaulting a prison officer.

In mitigation his defence solicitor said Smith suffered from Asperger syndrome and was also seeking help from charity Turning Point.

Sentencing, District Judge Kamlesh Rana said: “This is not just unpleasant but a disgusting and dangerous act.

“It must have been terrifying for the person who you exacted this on.”

She said the offence could only be met with a jail term, albeit one she could suspend.

Smith was jailed for 12 weeks suspended for 12 months and he must pay £75 compensation.