A man who drunkenly stumbled into some security barriers and knocked them down ended up spitting in the face of a guard who tried to take him to task. 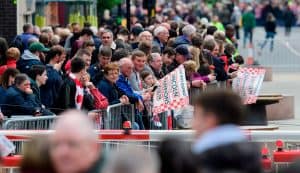 Robert Entwistle had been out drinking on May 5 when he knocked over some of the barriers being put up for Lincoln City’s victory parade though the city for winning the League two championship.

But after a security guard confronted him, Entwistle spat in his face and was arrested.

Leanne Townsend, prosecuting Entwistle at Lincoln Magistrates’ Court, said: “Colin Hook a security officer was working in the early hours of May 5 to put up barriers for an event which was going to take place later that day.

“The defendant was knocking over some of these railings and became verbally abusive and spat in the face of Mr Hook.

“He was later interviewed and accepts that he had been drinking and was drunk and said that he only knocked them over as he was drunk and stumbling around.”

Entwistle, 35 of Flaxley Road in Lincoln pleaded guilty to assault by beating when he appeared at Lincoln Magistrates’ Court on Thursday, June 13.

In mitigation Carrie Simpson said: “He understands the circumstances of his actions. He can’t remember everything that happened and accepts what the security guard is saying.

“He finds it difficult to accept that that he has done this and feels a great deal of remorse when he sits in court today.

“He wants to express how extremely sorry he is.”

Magistrates fined him £55 and ordered him to pay costs of £85 and a £30 victim surcharge.