An Aberdeen man who tried to jump a queue outside a supermarket during lockdown spat on a security guard when challenged. 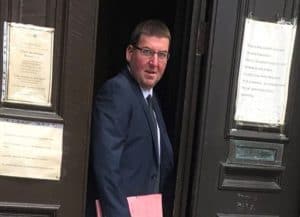 Mitchell Lyon pushed a barrier aside as he tried to skip to the front of a line of shoppers waiting to get into Sainsbury’s at Berryden Retail Park on April 2.

And when a member of security staff, who was monitoring the queue, intervened, 36-year-old Lyon spat on him.

Fiscal depute Lucy Simpson told Aberdeen Sheriff Court: “The complainer is employed as a security guard and was working at the locus.

“At around 12.45pm the complainer was at the locus and was monitoring the queuing system outside.

“The accused attended at the locus and was seen pushing a barrier to the side at the front of the queue in what appeared to be an attempt to skip the queue.

“The accused was asked to go to the rear of the queue by staff and other customers.

“At that point the security guard and a colleague approached the accused and, on entering discussions with him, they observed him to be under the influence of alcohol and decided he would not be allowed into the store.

Police were contacted and when they arrived Lyon was searched and officers discovered a friction lock baton.

In an earlier incident at the same store on March 31 Lyon shouted and swore at staff when he was refused alcohol because he was intoxicated.

He made comments including “I’m going to batter you”, “this is ridiculous” and “what are you going to do about it?”.

Lyon, whose address was given in court papers as Cattofield Place in Aberdeen, pled guilty to assault and to possession of an offensive weapon, the baton.

He also admitted behaving in a threatening or abusive manner over the earlier incident on March 31.

Defence agent Gregor Kelly said: “I would like to place before the court an apology from Mr Lyon. He regrets his conduct.

“He feels his conduct was disgraceful at a heightened time when the public were on edge.

“He’s not proud of his conduct.”

He added alcohol had been the “catalyst” behind the offending but that Lyon had abstained from drinking since the more recent incident.

The solicitor also said Lyon had found the baton while out walking and planned to hand it in when it was safe to do so.

Sheriff William Summers told Lyon: “Your behaviour was deplorable and you should be thoroughly ashamed of yourself.”

He ordered him to carry out 90 hours of unpaid work.

Jailed Portadown fraudster must pay £70,000 from the proceeds of crime