A boozy offender who threatened a bar doorman has been told by a judge that alcohol is a “mermaid calling you onto the rocks”. 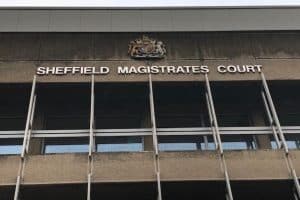 Sheffield Magistrate’ Court heard on August 10 how Ashley Nembhard, aged 36, of Pearl Street, at Sharrow, Sheffield, threatened a door supervisor at Bal Fashions bar, on Exchange Street, in Sheffield city centre, after he was refused entry.

Mark Hughes, prosecuting, said: “The defendant was refused entry because a private party was being held and he became verbally abusive and threatened to hit him with a bottle of wine he had in his hand and threatened to stab him although no knife was seen.

“The victim retreated into the premises and locked the doors and called police.”

Nembhard, who has a criminal record, pleaded guilty to using threatening behaviour after the incident on February 2.

Zawar Shah, defending, said: “He doesn’t particularly recall the incident or, at that time, he was under the influence of alcohol.

“I know a number of threats were made and he has to concede they were made but he cannot recall them.”

Nembhard also pleaded guilty to a separate offence of breaching a restraining order after he had contacted a specific individual which he was prohibited from doing.

District Judge Naomi Redhouse told Nembhard: “You are someone, when you are not drinking, who is an intelligent, insightful and pleasant man with a lot to say for yourself but when you are drinking you are horrible and you cannot remember your offending.

“You want to co-operate and you want things to change but it is very hard for you to make that change. This is why I am going to give you another chance to do it.”

She added: “You have to recognise that for lots of people in society you cannot drink. It is like a mermaid calling you onto the rocks and you cannot resist the song.”

He was also given a further two-year restraining order concerning his ex-partner and was ordered to pay £85 costs and a victim surcharge.

CCTV appeal after doorman punched by man outside Bridgwater Pub