A drunk man attacked a bouncer after taking advantage of the free bar at his Christmas works do. 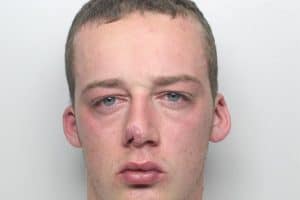 The assault happened as Matthew Kenny was ejected from Harvey’s Bar in Fenay Bridge because of his loutish behaviour.

The 27-year-old was so drunk he had no memory of what happened, but described himself as a “f*****g d****head” when police showed him the CCTV footage.

Kenny, of Waterloo Road in Waterloo, pleaded guilty to assault by beating.

Alex Bozman, prosecuting, said: “Mr Kenny was attending at a works event where there was a free bar and he was drunk.

“As a result of a verbal altercation with a female in the smoking area he (Kenny) was ejected from the bar by the bouncer.

“He reacted aggressively, making threats of violence and headbutted him in the lip and punched him in the face.”

Kenny was taken to the ground outside the Penistone Road premises.

When he appeared to have calmed down the bouncer allowed him to stand up but he punched the victim again.

The victim suffered visible injuries including a cut lip and sore and swollen jaw.

Mr Bozman said: “Mr Kenny was interviewed and said he couldn’t remember what happened because he was on a works do and it was a free bar.

“He was very drunk and couldn’t recall what happened.

“He was shown the CCTV footage of the incident which visibly shocked him.”

Mr Bozman told magistrates that the offence was made more serious as use of the head counts as a weapon.

They heard that Kenny had been out of trouble for three years but had spent some of that time in jail.

In August 2016 he was sentenced to three years in prison after leading police on a 100mph chase before crashing into a hedge.

He was followed by police as his passenger was seen to throw skunk cannabis from the vehicle.

Kenny led the officers on a dangerous chase, failing to give way at junctions and driving through residential areas at speed.

The pursuit ended ended when he lost control and spun into a hedge and Kenny was found to be over the drink-drive limit.

Aubrey Sampson, mitigating, told Kirklees magistrates: “When the CCTV was shown to him he said: ‘F*****g d***head’, referring to himself.

“That shows he’s shown remorse from the beginning.”

Mr Sampson said that prior to the Christmas event his client had no food and went there on an empty stomach.

He told magistrates: “He drank a lot of alcohol and drank over his limit.

“He was there with a friend and witnessed them having an altercation with the victim.

“He decided to intervene and that resulted in the assault.

“This was a one-off and he’s not had a drink since this incident took place.

“It was his birthday recently and he didn’t even have a drink.”

Kenny was sentenced to a community order with 21 days of rehabilitation activities including the Thinking Skills Programme.

He must pay the victim £150 compensation as well as £85 prosecution costs and £90 victim surcharge.