Door supervisor David Aslett was working with colleague Tom Phillips on the door of a Norwich venue when they were attacked on Sunday. November 10, last year, 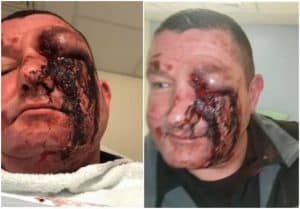 John Morgans, prosecuting, said the victim Mr Aslett, who was hit in the eye, suffered a smashed eye socket and has had to have a metal plate inserted.

He said the last update showed that Mr Aslett’s eyeball was still not in the correct position and said: “It would appear to be a permanent injury.”

He said the court would contact Mr Aslett to get an update on his medical condition.

Judge Anthony Bate adjourned sentence until November 9 for reports and asked for an update on the progress of the victim as well as a pre-sentence report on Read, who is said to have inflicted the injury with a punch.

He warned Read that all options including custody were open to the court.

The attack on Mr Aslett, one of the city’s most respected doormen, led to bars, pubs and clubs in Norwich, rallying round and having a collection for him.

Those who organised collections included Stadia, the Garden House, Bond and Mantra.

Regency Security, Mr Aslett’s employer, called it a horrendous attack and he was described as one of the city’s most experienced and well-loved doorman by venue owners after the assault.

Speaking afterwards Mr Aslett said his recovery may be a long road, adding: “I feel fortunate to have had so many people offer to help and have been overwhelmed with the love and support from the people of Norwich,”

He said that he hoped he could get back to doing the job he loved.

The attack also led for calls on social media for harsher sentences for those who attack doormen and women, as has been introduced for emergency workers.