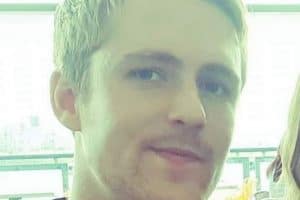 A drunk man who shouted “Freedom” before smashing a doorman over the head with a metal pole has been ordered to pay his victim compensation.

Gibson had been thrown out of the city centre nightclub following an altercation inside and challenged the door staff while outside.

During last December’s confrontation he picked up the metal pole and smashed doorman Mr Greechan over the head.

Edinburgh Sheriff Court was told the doorman suffered a gash to his head and “a large amount of blood” was spilled onto the pavement.

Gibson admitted the unprovoked attack at a previous court hearing and he returned for sentencing today.

Gibson, from Dalkeith, Midlothian, was also fined £200 and told he must also pay a victim surcharge of £10.

A witness, who did want to be identified, said: “The guy was acting like a complete lunatic after he had been thrown out of the club.

“He was shouting and swearing and acting the big man in front of the door staff and everyone was laughing at him when he began shouting ‘Freedom’ at the top of his voice.

“But we couldn’t quite believe it when he picked up the metal barrier pole and hit one of the doormans over the head – it was really shocking to see.

“The doorman didn’t go down but there was a lot of blood on the ground and the other door staff then jumped on him and took him to the ground before police were called.”

Last month prosecutor Jack Castor said the doorman was on duty outside the popular Jam House venue at around 12.40am on December 21 last year.

The fiscal said the doorman’s colleagues were “in the process of ejecting” Gibson from inside the club and once outside he turned violent.

Mr Caster said: “The accused remained on the pavement and Mr Greechan told him to leave but the accused took hold of a heavy metal barrier pole.

“The accuse lifted the pole above his head and Mr Greechan attempted to grab the pole from the accused’s hands.

“The accused then brought the pole down onto Mr Greechan’s head.”

Colleagues rushed in to help the injured doorman and Gibson was “restrained to the ground” by the staff members.

The fiscal added “a gash opened up on the scalp of Mr Greechan” which resulted in “a large amount of blood spilling out” onto the pavement.

Solicitor Paul Dunne said his client had received injuries himself while being detained by the door staff but admitted his behaviour had been “reckless”.

Mr Dunne added Gibson has “reduced his drinking significantly” since the incident.

Gibson pleaded guilty to assaulting Mr Greechan by striking him on the head with a metal pole to his injury at Queen Street, Edinburgh, on December 21 last year.

Ex-Doorman tackles ‘possessed, super-strength’ woman who screamed ‘I want to kill everyone’ on Jet2 Plane