A drunk Yorkshire police officer is alleged to have racially abused and punched a club Doorman who refused him entry to a nightclub just hours before he was due to start his early shift. 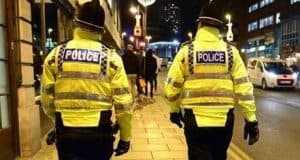 West Yorkshire Police Officer James Fridlington was due to start a 7am shift on July 17, 2019, but attended the Revolution Bar in Call Lane, Leeds the night before where he was observed by a door supervisor to be “unsteady on his feet”.

He was asked to leave the venue but refused and had to be escorted from the bar when he is alleged to have used “racially derogatory” language towards to the Doorman and identified himself as a police officer.

PC Fridlington returned to the venue moments later and was asked to leave again before using offensive language to staff.

A Doorman then attempted to forcibly remove him from the bar, when the officer is alleged to have punched him in the face.

He was detained at the scene and an allegation of assault was reported to police.

He was taken into custody where he is alleged to have repeatedly referred to the Doorman in offensive terms.

PC Fridlington was given a breath test at 9.29am the next day and gave a reading of 50 micrograms of alcohol per 100 millilitres of breath.

A West Yorkshire Police spokesman said: “There is a presumption that a person is unfit work if they have more than 13 milligrams of alcohol per 100 millilitres of breath.

“It is alleged that PC Fridlington has breached the Standards of Professional Behaviour in relation to Fitness for Duty and Discreditable Conduct.”

A misconduct hearing will take place on October 19.