A doorman was glassed in the face and left with serious injuries after asking someone to leave a nightclub. 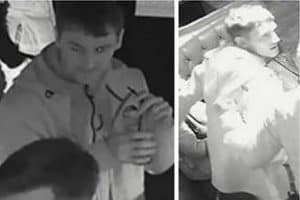 The bouncer had reportedly asked a man to leave Avenue Bar but then suffered serious injuries in the incident, which happened on February 28.

Police have now released CCTV images of a man in connection with an incident which saw a doorman glassed in the face.

Officers were called to the Scarisbrick Avenue nightclub at around 1am when the dramatic scenes broke out.

A second man and a woman were also asked to leave by another member of door staff, who was also assaulted sustaining a minor injury.

Joseph John, 33, and 24-year-old Chelsea Johns, both of Willow Way, Liverpool were arrested and charged with section 39 assault and are due to appear at Sefton Magistrates court on Wednesday, 9 September.

Detectives are continuing to appeal for information and are keen to speak to the man pictured who they believe may have vital information to assist the investigation.

Detective Inspector Paul Gillies said: “We have arrested and charged two people in connection with this incident, however an investigation is ongoing after one doorman sustained serious facial injuries, and we believe that the man pictured may have information to assist enquiries.

“Although a few months have passed, we know the incident would’ve been shocking to witness and we know a number of people would’ve been in the bar and the general area at the time. I would ask anyone with information to please contact us.”

Anyone who recognises the man pictured, or has any information is asked to contact Merseyside Police on social media or 101, quoting ref. 20000127299; or call Crimestoppers anonymously on 0800 555 111.

Shoplifting yob that spat in security guard’s face as he was wrestled to floor, ordered to pay £128