Door supervisor David Aslett was working with colleague Tom Phillips on the door of the Queen of Iceni pub in the Riverside area of the city when both were attacked by Dean Read, 31. 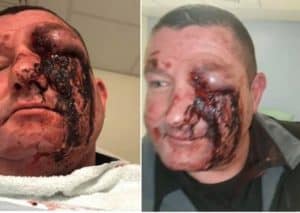 Norwich Crown Court heard Read had been in the pub with friends but had gone over to door staff after friends of his were refused entry.

John Morgans, prosecuting, said Read had gone outside and was “aggressive from the start”.

He had been allowed back into the pub to get his jacket but later swore at the bouncers.

Read was grabbed by Mr Phillips but the defendant slipped out of his jacket causing the doorman to fall.

Read, who trained at a boxing gym, punched the bouncer in the head about five times.

Mr Morgans said Mr Aslett then punched Read to force him back from his colleague but the defendant took a run up before delivering a “colossal punch to his eye”.

Such were the injuries sustained by Mr Aslett that one of the manager’s that came across to help “started screaming”.

An ambulance was called and the defendant, who had left the scene, returned to be arrested following the incident on November 10 last year.

Mr Aslett suffered a blow out fracture to his eye socket and required two operations.

The court heard Mr Aslett suffered scarring and still has double vision in the injured eye which is understood to be permanent.

In a victim impact statement he said he still suffered from pain and discomfort and felt like a “freak” due to his scarring.

Mr Aslett had been a doorman for 15 years and described it as a “job I loved” but he has had to stop working as a bouncer due to the injury and now “feels vulnerable all the time”.

Jailing him for a total of 28 months Judge Maureen Bacon said he had caused a “devastating injury” to Mr Aslett while in drink.

Dan Taylor, mitigating, said it was an “extremely unpleasant incident” during which “in a moment of madness he had inflicted a great deal of pain”.