A pub doorman is fighting for life in hospital after being hit on the head with a brick while working in Coventry. 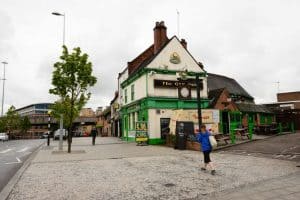 The 28-year-old man was attacked in the early hours of this morning (August 23) outside the Oak Inn in Far Gosford Street.

The assailant got out of a grey Seat Leon with missing number plates which had pulled up outside the venue before throwing the brick.

The unnamed doorman is currently in hospital having undergone emergency surgery.

Detective Sergeant Aman Hundal, of West Midlands Police, is appealing for witnesses to the attack, which took place at around 12.45am.

Det Sgt Hundal said: “The victim has suffered a serious head injury…we need to find the men responsible for this violent assault.

“We have seized CCTV which shows the offenders arriving and leaving in a grey Seat Leon which had the number plates removed.

“There were quite a few people nearby and I really need them to get in touch to tell me what they saw. And I would also ask taxi drivers and other motorists in the area to check dash-cam footage to see if they have caught the offending vehicle on camera.

“There will be people in Coventry who know who is responsible for this.

“People who were on a night out last night and have access to a grey Seat Leon.

“The victim is fighting for his life in hospital and I would urge those people to do the right thing and contact me.”

A spokesman from the Oak Inn said: “We are cooperating and working with the police. It’s an ongoing matter and we’re not able to further comment at this time.”

Anyone with information can call West Midlands Police 101 or message via Live Chat on the force’s website. Please quote crime ref 20CV/201054N/20.

Alternatively, you can speak to the charity Crimestoppers anonymously on 0800 555111. You won’t be asked for your name and calls cannot be traced.