A DOORMAN at a Dunfermline bar was injured after being punched repeatedly and knocked to the ground during a disturbance. 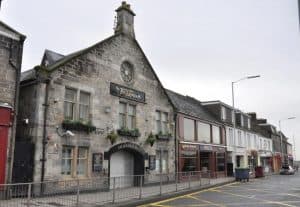 The attacker was Robert Todd, 38, of Tweed Street, Dunfermline.

He admitted that on November 3, at the Brasshouse, Carnegie Drive, he assaulted the staff member by punching him to the head repeatedly, causing him to fall to the ground to his injury.

Depute fiscal Jill Curry said that, at around 2.40am, Todd was asked to go downstairs as the upstairs area of the bar was being closed.

Shortly afterwards, he approached a staff member complaining about something being spilled on him, staining his jeans.

“He began ridiculing the complainer about his appearance. He was told to leave the premises and became more confrontational,” added the depute.

At the front door of the bar, Todd punched the worker on the side of his face, then pulled his jacket over his head and continued to strike him three more times.

A member of the public intervened to stop the attack and, during the struggle, the doorman fell to the ground. He was then punched again when he was on the ground.