A MUM from Wrexham threatened to bite off a doorman’s nose after she was refused entry into a town centre nightclub. 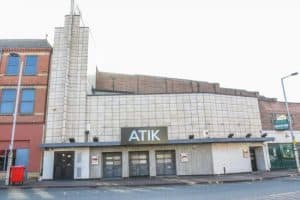 Kelly Marie Stranz admitted punching Darren Evans to the back of the head outside ATIK on Brook Street, Wrexham, in the early hours of Sunday, February 24.

Rhian Jackson, prosecuting, said Stranz, 32, of Cheshire View, Caia Park, was initially allowed into the venue but did not have enough money on her to pay the admission fee and was asked to leave.

She began shouting, swearing and hurling abuse at the manager of the nightclub calling him “a wanker” before Mr Evans stepped in.

Stranz proceeded to call him fat and a “paedo” and also shouted at a group of women waiting to enter the club and called them “slags”.

She punched Mr Evans to the back of the head and tried to hit him again before she was restrained and police officers arrived.

Officers described mother-of-two Stranz as being “very drunk” and “struggling to hold herself upright” and said once inside a police vehicle she began headbutting sides of the cell.

In interview she told officers she had been drinking beer, wine and cider all day in her garden and then persuaded her brothers to go into the town centre where they visited numerous bars and she drank whisky.

When she arrived at ATIK she only had £3 on her when the entrance fee was £5 and hoped she could borrow some cash off people she knew inside.

She admitted the assault and also offered information that she had threatened to bite off Mr Evans’ nose, with CCTV from outside the club supporting the doorman’s evidence.

Michael Pugh, defending, said Franz was “extremely remorseful and embarrassed” and was now attending counselling session for her problems.

Magistrates chairwoman Deborah McKinnel said: “These were quite nasty words and they have implications for those who heard them.”

Franz was given a conditional discharge for six months and ordered to pay £80 compensation to Mr Evans, £85 costs and a victim surcharge of £20.