A DOORMAN was punched by a man leaving him with facial injuries which needed hospital treatment following a late night attack in Bridgwater last month. 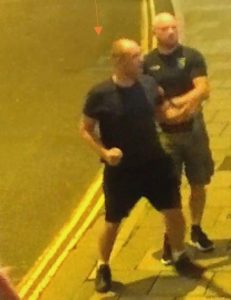 The incident happened outside The Blake Arms on Saturday, August 8 at about 11.50pm.

The door supervisor was punched by a man in his 30s/early 40s, leaving him with facial injuries that required hospital treatment.

Avon and Somerset Police have now released a CCTV image of a man they would like to speak to in connection with the incident.

A spokesperson for Avon and Somerset Police, said: “The man we’d like to speak to is described as being of a medium to large build, bald, and wearing dark shorts, a shirt, and trainers. Police are keen to hear from anyone who can help to identify him.”

Officers would also like to identify a second man shown in the CCTV image who may be a key witness to the incident.

Anyone who saw what happened or have any information about the incident should contact the police by calling 101 and quoting reference 5220179280.

You can also contact the independent charity Crimestoppers 100 per cent anonymously on 0800 555 111 or via their Anonymous Online Form.

No personal details are taken, information cannot be traced or recorded and you will not go to court or have to speak to police when contacting Crimestoppers.