A security guard was deliberately rammed by a van as he tried to stop thieves from stealing mopeds. 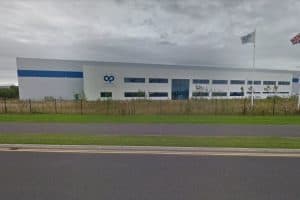 At around 1am on Wednesday, October 28 a silver transit van containing a number of people entered the grounds on Skyline Drive in Warrington.

Once in the grounds the group got out and stole two mopeds from Plastic Omnium, before attempting to flee the scene.

But as the group drove off a 23-year-old security guard was deliberately hit by the vehicle as he attempted to stop the vehicle going through the gates.

He was taken to Warrington Hospital with serious injuries to his hand and leg and has since been released.

The van was located and recovered in the Belle Vale area in Liverpool a few hours later.

A 25-year-old man has been arrested on suspicion of attempted murder and theft of a vehicle.

He is currently in custody waiting to be questioned by officers.

Detective Sergeant Mark Naylor, from Warrington CID, said: “The security guard was seriously injured as he tried to stop the van leaving the grounds and we are doing all we can to identify those involved in the incident.

“We have been conducting a number of enquiries and as part of our investigation I am keen to hear from anyone who may have seen a transit van acting suspiciously in the area or saw an altercation at the gates.

“The two mopeds have not yet been recovered and I would appeal to anyone who saw them being unloaded after they had been stolen to contact us.

“I also want to urge anyone who has dash cam footage or any information which could assist the investigation to get in touch.”