The 24-year-old, whose condition means she can sometimes become unsteady on her feet and has a speech impediment, was celebrating her birthday on Saturday night, at Camp and Furnace in the popular Baltic Triangle. 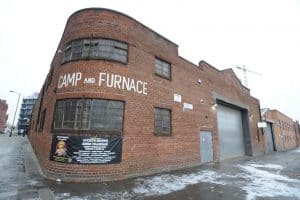 However while inside the venue, at around 10pm, she claims she was approached by a manager who allegedly accused her of being drunk.

The woman, who didn’t want to be named, said she had only drank one glass of wine, but said she was left “crumpled on the floor, sobbing” after being told to leave.

She then claims, after leaving with her friends, doormen refused to allow the group back in, despite them trying to explain and allegedly told the women: “We’ve had her card marked as soon as she came in.”

Bridget Griffin, 24, from Toxteth, who was on the bingo night out , said this has happened to her friend before.

The civil servant, and part-time riding school boss, told the ECHO : “This has happened before a lot in Liverpool.

“There are certain bars or clubs in the city that we know won’t let her in.

“Usually, we pull the doorman to one side, explain the situation, and sometimes they listen, other times they don’t.

“Because of her cerebral palsy, my friend shakes, her voices can quaver and she is sometimes unsteady on her feet.

“It’s nothing major, although I can see why doormen think she’s drunk.”

She added: “Enough is enough, I understand people can be drunk, but in this case it’s appalling and very unfair.

The group of 10 women had to collect their bags and coats, and then left, choosing to go to Heebie Jeebies nightclub on Seel Street, where they said doormen know of the 24-year-old’s condition and are happy to allow her entry.

Bridget said she has now contacted Camp and Furnace to complain – who have been in contact – after she publicised what had happened to her friend on Twitter.

Autobiography: The violent life of a Welsh bouncer bottled, stabbed, shot at, sued and run over